July 2018 Open Book Group – In The Darkroom by Susan Faludi 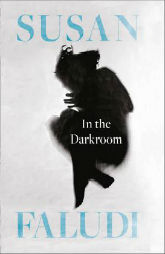 Welcome to Toni and thank you to Gillian Shenfield for moderating In The Darkroom by Susan Faludi. Faludi is a successful New York-based feminist journalist and author. In 1991 she was awarded the Pulitzer Prize for Explanatory Journalism.

Out of the blue in 2004, Faludi receives an email from her father, living in Budapest, from whom she has been estranged for 25 years. He tells her he has undergone reassignment surgery in  Thailand and now identifies herself as a complete woman changing her name from Steven to Stefanie. Curious, Faludi travels to Hungary to try to unravel the enigma her father has always presented to her.

The subsequent memoir explores issues of identity be they religious, cultural or gender. Faludi takes us through the current medical literature by renowned physiologists and psychiatrists. Are there clearly two distinct genders or is sexuality more fluid with stages along a spectrum? Set against the personal interactions is an intensely researched history of Hungary. This makes sober reading. The WW2 years were appalling even by the standards of the time. The Hungarian Government sent 100,000s of its own citizens to the deaths camps without Hitler needing to intervene. Modern day Hungary remains very grim.

On her initial visit Stefanie has no intention of opening herself up and stonewalls every attempt by Faludi to investigate Stefanie’s past. However as the memoir progresses we learn about her lonely childhood ignored by her rich Jewish parents who lost everything in the war, living on the streets as a teenager escaping transportation to the death camps, often by impersonating the fascist police, leaving Hungary to become an entrepreneur in Brazil and then a controlling, violent, husband in America. So many different identities……..did this influence making the ultimate change? The title In The Darkroom reflects her profession as a photographer and film developer subtly altering fashion photos for premier magazines where her skills were held in high regard.

The discussion kicked off with Faludi’s motivation for writing the book. As one member pointed out, as a journalist receiving that initial email it probably triggered a professional reaction of “there’s a good story here, let’s get it”. All agreed her accomplished journalistic style meant a fluid “easy” read of often harrowing subject matter.

Several members felt that while they shared her initial frustration with her father’s stonewalling, seemly denying any existence before she identified as a woman, they found Faludi was equally closed, taking the role of the “objective journalist”.  Many wanted more of her emotional reactions though clearly his brutish behaviour as a father had made her wary. However, as the visits progressed over the years Faludi did soften particularly when she learnt about Stefanie acts of great bravery during the war.

The whole issue of full physical gender reassignment cannot fail to provoke conversation. We were fortunate in having several members who professionally, socially and within their own family have supported people transitioning. They were able to share some great insights.

We had been intrigued with Stefanie’s obsession with makeup and clothes, selecting outfits more suited to a younger, even adolescent, woman. Apparently, this is a common reaction to the newly transitioned. One member likened it to “a rebirth” starting at puberty. This, of course, makes it even harder to “pass” leading to greater social isolation rather than less. To have any real success in this area puberty needs to be avoided through hormone therapy ……a very challenging decision for any family.

While OBGers are certainly long term feminists, most of us had no idea on the current thinking over this issue…..which is, as we eagerly quizzed one member……if you have lived for 40 years in the privileged male world altering your body does not alter your mind, and so you have no right to comment on the female condition/oppression etc. You have no experience of it.

This argument took us back to the book. At first Stefanie tried to block out all her past. New gender, new person. Maybe the success of the visits was getting Stefanie to acknowledge her past and so by their last interaction in 2014, just before Stefanie’s death, both had become more open, more content and even reconciled.

Faludi was definitely in her comfort zone with her detailed account of Hungary’s history. We all learnt a huge amount here. One member opined that maybe it would have been better as two shorter books -a Susan/Stefanie story and a Hungarian history. Others thought, no, you needed the “lighter” relief of the personal journey to allow you to regroup for the next chapter in Hungary’s.

In the same way as I am having difficulties condensing the wide ranging discussion, so we had problems concluding the discussion, running over time until, with no logical break in sight, time was called!