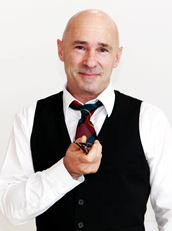 Each speaker at a FOBL event brings us a new perspective on issues of our culture, particularly literary ones. Our guests reward the audience of FOBL members and visitors with intelligent and entertaining food for thought. This was certainly the case at our last event for 2018. Luke Slattery, a Balmain resident and respected and awarded journalist, critic and author, shared fascinating philosophical, historical and literary insights arising from his recent novel, Mrs M.

The book is an ‘imagined history’ of Lachlan and Elizabeth Macquarie and is narrated by the Elizabeth. Other major characters are the unnamed architect (a forger transported to New South Wales, based on Francis Greenway) and Thomas Bigge, the Commissioner who was sent to NSW to investigate Macquarie for his radical emancipationist policies.

Luke’s talk on Macquarie’s policies was most engaging. He was careful not to make a saint out of the Governor who led the colony from 1810 –1821 but his perspective led me not just to read the novel but also to follow up on this time in Australian history through Luke’s The First Dismissal, published by Penguin.

Supper is a feature of the events FOBL hosts. Past and present committee members once again did their bit, so our amiable audience supped richly both before and after Luke’s talk. Luke was generous with his time; many wished to talk to him before he left.

Mrs M. was originally published in hardcover has just been reprinted as a paperback. Google indicates the title is also available as an audiobook.