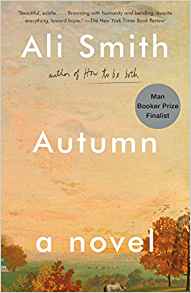 Autumn is the first of Ali Smith’s seasonal quartet. As one member commented, it is a beautifully written postmodern novel that considers, among other things, the chaotic condition of today’s social life in Britain (and elsewhere) brought about by the mess modernity has gotten itself into.

The group was split in terms of enjoyment of the book, some commenting that they found it difficult to follow as the non-linear style flits between a past and a present that we carry with us into the future even as we read.  Others said they had in fact read it more than once and that as a consequence the many messages being conveyed by the book became much clearer. It was not simply a book about Brexit as some reviewers had suggested but about many things which, from the opening pages, manages to convey a kind of dream-reality that invites reader analysis for meaning.

Turning and turning on the widening Gyre

The falcon cannot hear the falconer

Mere anarchy is loosed upon the world

But in true postmodern style there are more and much too numerous to name here.

In terms of the plot, it’s about avid reader, Elisabeth Demand (du monde – of the world), her relationship with her mother, Wendy, and particularly lifelong friend (since she was 8 years old), Daniel Gluck, described as a deep thinking intellectual, elegant older gentleman and one-time jingle writer nicknamed Gershwin. One time acquaintance of the rich and famous, Daniel asks questions such as: “How many worlds in a handful of sand?” (12), and suggests we sometimes wait a lifetime for lifelong friends (52). At the opening, Daniel is apparently on his deathbed or is dreaming or may have already died. It’s unclear but all is beautifully resolved at novel’s end where there is no closure but perhaps so

And it’s about Daniel’s brilliant little sister who, like Elisabeth, reads all the time, Hannah Gluck – her treatment by Fascist Italy’s troops in 1943 (after the Italians refused to co-operate with the Nazis in rounding up Jews during the Italian occupation of the French town of Nice, between 1940 and 1943 (64).) It’s about Christine Keeler, hapless model and topless showgirl and the pop art painter, Pauline Boty (the Wimbleon Bardot). (All examples of how history – man’s world/story – has always been cruel to the powerless.) And of course it’s a comment on the blockheaded imbecility of British bureaucracy – about Brexit – and how people all across the United Kingdom might have been feeling after the vote on June 23 2016.

One of the group said she thought the novel plays with time and gave a number of examples of how this was working. She suggested how time is intrinsic to meaning which by its very nature is historical and noted how Smith plays with language to show how words can make the unseen visible; how literature has the power to help shape our world view; and how story-telling and reading constitutes a never-ending leaf-fall. There are always and always will be more story (193), says Daniel Gluck.

Most agreed that the novel was beautifully written and that Smith’s love affair with language provided an insight into how words, “are themselves organisms” (69) – growing, living things. Using the word “still” as an example Smith shows us how the meaning of words often cannot be fixed but rather realise their meaning from the words around them. The novel suggests that the same can be said for pauses or silences which can be protective as well as informative so that no words are needed.

One of the group mentioned how the novel uses humour with much success. Another pointed out that Daniel Gluck observes: “nothing comic isn’t serious” (30) giving the impression that even if the scene appears to be funny, something quite serious is actually happening. Opposing meanings such as this are often present simultaneously in the novel.

It was agreed that Autumn speaks to many things. Not least of these are memory and the imagination. Daniel is of the opinion that “memory and responsibility are strangers. They’re foreign to each other. Memory always goes its own way quite regardless” [of responsibility] p.160. The question was asked what this might mean for memoir, autobiography or biography genres.

All of this suggests that what we take to be true or meaningful is a shifting field of relations in which there’s no stable point. The novel encourages us always to question what we see, hear or read: never to take them at face value.  Daniel says that when the State is not kind, the people are fodder (171); that it was forever thus, and this is the world’s sadness. The novel consistently suggests that His-tory has always been cruel to the powerless and things which seem to change for the better, in reality stay very much the same right before our eyes.