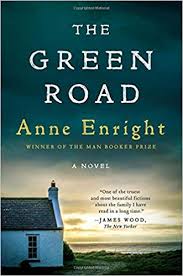 Welcome to Dianne and thank you to Maureen for moderating The Green Road by Anne Enright, a Man Booker Prize-winning author.

The Green Road was published in 2015, the same year that same-sex marriage was legalised in Ireland. It’s Enright’s most recent novel and won the Irish Novel of the Year.  The book is character rather than plot driven. It revolves around the mother figure, Rosaleen and her relationship with each of her four children, Constance, favourite Dan, Emmet and Hanna.

In the first half of the book each chapter is a vignette of a different protagonist. We open with the youngest sibling, Hanna. It’s 1980 and she is twelve years old, living the family home Ardeevin at the end of The Green Road. A road, described as “the most beautiful road in the world”, hugging the wild coastline of Co. Clare. Hanna watches Rosaleen take to her bed, something she seems to do quite regularly, as recently engaged Dan has announced his plan to join the priesthood. Rosaleen fears she will lose him to the missionaries. Hanna dreams of becoming an actress to escape the realities of everyday life. Later in the novel, we learn her acting career peaked in her mid-twenties, after which parts dried up and she became an embittered alcoholic suffering severe postnatal depression.

Suddenly its 1991 and we are in New York with Dan. He never became a priest rather he is portrayed as a man who dabbles in gay sex but also has a girlfriend, who he says he loves. His passing as a heterosexual rather than a bi-sexual man seems hypocritical, but he is struggling to come to grips with his sexuality Through his character Enright immerses us in the havoc wrecked on the gay community by the AIDS virus.

Swinging back to Co. Limerick in 1997 it’s Constance’s turn. We find her sitting in a breast cancer clinic, waiting for the results of her scan, reflecting over her life to date. She never left Ireland and married the local boy, Dessie, who came good in Ireland’s property boom. She now lives a comfortable life, with their three boys, in bungalow bliss. Constance is variously presented as an overweight, loud fusspot but she is a responsible, caring daughter; just not the pony-riding, ballet dancing daughter Rosaleen wanted. All Constance wants is to make people happy.

Moving forward to 2002, Emmet, now 38, is working for an NGO in Segon, Mali. He has been in Africa for many years and is suffering from compassion fatigue. He is cynical that the organisations he works for can ever combat the structural problems perpetuating third-world poverty. He takes out his anger on his mother and siblings who he considers have no feelings for the injustices in the world.

Finally, in 2005, 25 years after the opening chapter, we are back at Ardeevin. We meet the root of all her children’s anxieties, 76-year-old, Rosaleen. Widowed for several decades she decides it’s time to sell the family home. She writes Christmas cards to all her children asking them to come home for one last Christmas dinner together.

The second half of the book describes the gathering of the clan for Yuletide celebrations. Strangers, bonded by blood, meet. Sibling rivalries and resentments simmer and boil over. Rosaleen decided to go for a drive down the Green Road in the late afternoons after Christmas lunch. She fails to return.  Where is she? Her children’s reactions reset all their lives.

We were mixed about the first half. Some found rushing through the years rather disjointed. For example, we left Dan in chapter one heading out to join a Seminary and open chapter two with him in the middle of the New York gay scene. What happened in between? When we jumped to Africa with Emmet it started to feel a bit far-fetched, like she was trying to capture all the woes in the world through five characters.

It was best to treat each chapter in isolation, almost as a short story. Enright’s beautifully crafted sentences created realistic poignant scenes. You could, hear the Irish brogue, recall the fear and horror of the AIDS, epidemic in the 80s, relate to waiting for mammogram results.

We were well rewarded in the second half when the family gathered for Xmas lunch. The tensions, familiar to many of us, were perfectly captured as all members of the family reverted to childhood hierarchies with Rosaleen, the dominant, emotionally destructive, parental figure. Members with happier memories of their upbringings admitted to being bemused by all the drama.

We felt particularly for Constance. The scene in the supermarket of her shopping for all the Christmas fare, returning time and again for extra bits, only to forget the coffee to the chagrin of the rest of the family, who had made no practical contribution, rang so true for many members. Her thoughtfulness in trying to find a gift for her mother only to have it rebuffed in one cutting sentence sent chards of recognition through us.

Rosaleen was also particularly well-drawn as the attention-seeking mother no one could please. In her eyes her marriage to silent Pat, a non-event after the first six weeks of lust, had embittered her as much as her non-achieving children. One member noted that Rosaleen couldn’t love herself so how could she love her children? We were confused why she had taken to her bed on news of Dan joining the priesthood. Wasn’t that every Catholic mother’s dream?

When Rosaleen goes missing, suddenly the family comes together for the first time, each playing their part to find her. Sibling disputes are forgotten. When she is found sheltering in a dark cave for the first time, she shows some warmth towards her children and at last some hope for their future.

Why do Irish novels always have to be so depressing? Bemoaned one member. Maureen argued that it was a result of Ireland’s history. As an Irish writer, from a land occupied by the English from 12th century, potato famine etc. etc., you were steeped in the gloom of your country’s past. Your writing simply reflects this.

Another member, interestingly, felt that Irish mythology was also referenced. Ireland is the home of fairies and goblins. Had Rosaleen had a spiritual experience when she was lost for hours in the dark? She certainly came out of the cave a different person.

If you are after a superbly written novel about a dysfunctional Irish family The Green Road is one to pick. However, if this is not your first thematic choice Anne Enright is not the author for you.

Our next meeting is Tuesday, 10th September 2019 when Mirror, Shoulder, Signal  by Dorthe Nors will be discussed, moderated by Narelle Garrish.