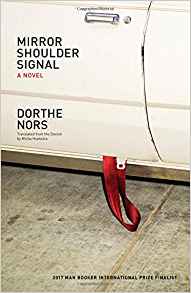 Thank you to Narelle for moderating Mirror, Shoulder, Signal by Danish author, Dorthe Nors. Shortlisted for the 2017 International Booker Prize.

In Nors slim, contemporary, novel we meet Sonja Hansen a 40-year-old single woman who is learning to drive for the first time. Her aggressive, bullying, driving instructor Jytte won’t let Sonja change gear on her own. Jytte keeps her hand firmly on the gear stick. Unwilling to challenge Jytte, Sonja furtively asks the head of the driving school, Folke, to teach her. He lets her put her hand on the gear stick but unwelcomely puts his hand over hers. Sonia works as a translator of Swedish crime novels. Knowing Folke’s wife is a fan she brings her some books which she places in the bag in the back seat of the car hoping their presence will remind of Folke of his wife.

Besides her foray into learning to drive, the novel has a minimal plot. It follows Sonia’s meandering inner thoughts as she reflects over her life. She was brought up in Jutland an area of wilderness and tight-knit conservative farming communities. She clashed with her “perfect” sister, Kate, and her emotionally cold parents. At 20 she and friend Molly decide to escape and seek the bright lights of Copenhagen.

Her musings bounce back to her childhood. She recalls the singing whooper swans, hiding in the rye and high in the tops of the trees, her creativity stifled and oppressed. She felt an outcast as a teenager, and 20 years later in Copenhagen, single and childless with few friends around her, she still feels an outcast.

Sonja writes letters to Kate happily married with children in Jutland, fantasising about bridging the communication gap, but the letters are never sent.

Other characters include Ellen, her masseuse who Sonja visits to relieve the stress of learning to drive. Ellen tries to include her in a meditation group she is taking hiking in a local forest, but Sonja thinks it’s all rather self-indulgent and makes an early escape. Molly, meanwhile, has embraced city life qualifying as a psychologist and having numerous love affairs.

Should she, can she, go home to Jutland? Should she stay in Copenhagen? Why does she feel this way? The final chapter does give us some insight into the root of her unhappiness and hope for her future.

Opening the discussion, we agreed Nors’ writing was not only direct and honest, but there were some very funny moments of slapstick humour as, to add to everything, Sonja suffers from positional vertigo. One member confessed to laughing out loud at Sonja expense.

There were general murmurings of sympathy for Sonja and her driving lessons. It was obvious that her experience with Jytte and the gear stick was a metaphor for her inability to shift her life forward

One member commented that she found Sonja rather boring and a bit of a wimp. Sure, at 21 Jytte may have intimidated her, but surely a 40-year-old woman would have challenged Jytte or, at least, not felt she had to hide from her when asking Folke to take over the lessons. As for putting the books in the car to remind Folke he had a wife…. hello? When Folke stops the car in a remote place and wants her to get out and follow him to “look at the marshes”, she meekly acquiesces all the time wondering if she is paying for this as part of her driving lesson. “Well, yes you are Sonja”, bemoaned this member. If you didn’t like him aren’t there other driving schools in Copenhagen? Someone wondered if Sonja was quite all there.

Another member felt very differently. She argued that Sonja is a representative of a large proportion of our population who is suffering from loneliness. A condition that is generally hidden from public scrutiny. Growing up with controlling parents and restricted avenues for self-expression is a common experience for many people. It was not surprising Sonja would be comfortable submitting to controlling characters like the driving instructors. Feelings of loneliness and alienation are compounded in a world where everyone appears to be leading perfect lives on social media platforms. Sonja was not some sad loser, rather her life was new normal for many city dwellers whose sense of community and family connections have been lost and broken. Sonja’s dreaming of returning to a simpler life in Jutland was an antidote.

She presented a very lucid argument. The “Sonia is a wimp” member, and everyone else around the table, sat upright with delight. Pondering this angle, we saw Nors’ novel in a new light and with much more depth.

Turning to Sonja’s job as a translator of Nordic Noir novels we noted that again this was a solitary role and one which did not provide her with the creative outlet she hoped she’d find in Copenhagen. Other novels in this genre, such as The Bridge and The Killing was referenced. These novels contain graphic violence with the strong readership among middle-aged women like Folke’s wife…… and us. We wondered why but didn’t go there! Was Nors using this to draw the reader’s attention to another section of society present but also hidden? Scandinavian societies top the world standard of living charts with enviable welfare and educational outcomes, and yet have high suicide rates. Again, all is not always what it seems.

Several members could relate to Sonja’s craving for the wildness. The tame forest on the outskirts of the city, where Ellen takes her mediation group to, is no replacement for the vast emptiness of the Jutland peninsula.

We also noted that Jutland is not necessarily the rural haven Sonja imagines with reports of small farms being bought out and amalgamated by large corporations. It’s communities too are being broken down.

In the final chapters, she makes her first a genuine connection with Martha a stranger who asked her for directions on a train trip. We felt relieved this could be the catalyst she needs to drive her life forward.

My friends suggested we considered Mirror, Shoulder, Signal for OBGs booklist ” A 40-something woman in Copenhagen grapples with her identity as she tries to learn how to drive.  It’s a bit plotless and quirky but I really enjoyed its experimental narrative and exploration of a woman trying to come to terms with the negative aspects of contemporary life. Won’t be everyone’s cup of tea but should prompt some lively discussion.” She was right on all counts.