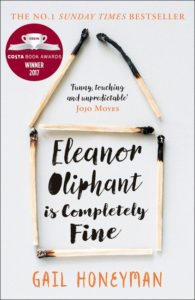 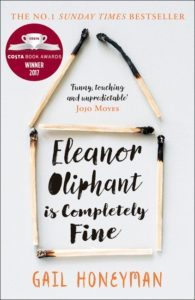 The novel is split into three sections told through Eleanor’s voice. Good Days. Eleanor lives alone. She has worked in the same office for nine years. Her weekends are consoled by a bottle of vodka she buys each Friday night. We quickly gain the impression that she considered a naive odd bod by her colleagues. She is an outsider, not part of the water cooler gossip crowd. She appears to have no idea how to operate within standard social conventions.

Eleanor wins tickets to see Johnnie Lomond play at a local concert. She is convinced he is the love of her life and disrupts her normal routine to buy new clothes, beauty products, and a phone and computer to track him.

Mummy always phones Eleanor on Wednesdays. Mummy calls her ugly because of her scarred face and ridicules her attempts to attract Johnny Lomond. The conversation ends with Eleanor crying and hints at a dysfunctional, complex, history between the two women. Is Mummy in prison?

One day after work she and the office’s new IT guy, Raymond, come across Sammy an elderly man, who has fallen over. They rush him to hospital. Slowly the three form a friendship. After a visit to the hospital Raymond and Eleanor to go for a drink. It’s clear Eleanor has never been in a “public house” and is unfamiliar about what, and how, to order.

Sammy’s family, grateful for their intervention to help their father and invited them to family parties. Eleanor assures Laura, Sammy’s glamorous daughter, that she has no romantic interest in Raymond but is seemingly jealous when Laura makes a move.

A social worker visits Eleanor at home. We learn she has spent most of her childhood in foster homes with very mixed success. Physically her needs were met, but her emotional care was sadly lacking. After the visit, to comfort herself, she reads her favourite novel, Jane Eyre. She also eludes to Sense & Sensibility. She is dismissive of its happy ending but notes that the sisters’ names, Elinor and Marianne, are the same as hers and her, as yet unmentioned, sister Marianne. Jigsaw pieces of Eleanor’s past life are revealed to the reader.

When Sammy suddenly dies of a heart attack Raymond and Eleanor attend his funeral where they both become very emotional. A drunken Eleanor tells Raymond about a house fire that she was in as a child.

Eleanor spots Johnny Lomond is playing at The Cutting and it’s full steam ahead to prepare. However, she is bitterly disappointed in her idol when he drops his pants on stage. He is not the perfect gentleman she fantasised.

Bad Days. Distraught she plans to drink herself to death. Raymond finds her naked, under the table, in an alcoholic coma when he comes to her flat worried by her absence from work. He helps her take care of herself and start counselling. Through many sessions with Dr Maria Temple, she reveals that Mummy had started the fire in an attempt to kill herself, Eleanor and her little sister Marianne. Eleanor was the only survivor and has since suffered terrible survivor guilt.

Better Days. Returning to work, Eleanor receives a warm welcome from the office. Raymond helps her research the details of the fire that she can’t remember. She continues therapy to come to terms with why she had been pretending that she had been speaking to Mummy for all those years even though Mummy was dead. Raymond asks her on a date. We a left wondering if she will accept.

There were smiles all round from the large OBG Xmas gathering. We were delighted by Eleanor. Honeyman creates a delightful, courageous yet damaged character. The darkness is relieved by the humour of her observations of other people and the ridiculous nature of many modern day social conventions. Just like Bridget Jones, here is a character that made you laugh out loud as you read.

Some wondered if she was on the Autism spectrum given her apparent naivety in negotiating relationships. We concluded that it was more likely a result of her traumatic childhood. Moving through numerous foster homes and different schools she would have been isolated, her personal development stumped. Now in her mid-twenties she was starting to explore romantic feelings with her teenage-like crush on Johnnie Lomond. One member noted that she had told Raymond about a relationship with ex-boyfriend Declan, but it was clear to both us, and Raymond, that it had been a painfully abusive one.

We agreed the book was about loneliness, particularly young people their twenties, a demographic not usually targeted in discussions of this growing social phenomenon.

It was also about mental health, Eleanor’s PTS, Mummy’s schizophrenia (?) and how not to judge a book by its cover. The office workers poking cruel gibes at Eleanor blissfully unaware of her past.

We were warmed by how small acts of kindness can ameliorate these conditions, for example, Laura’s haircut for Eleanor, Raymond’s initial patience with her in the pub and his growing affection for her as she slowly opens up to him. Then, pleasingly, when Eleanor returns to the office the warm welcome she receives from her previously callous co-workers. We had misjudged them too.

Eleanor description of the shambolically dressed, geeky and slightly awkward Raymond was beautifully drawn. We see what Eleanor sees when she looks at him, but at the same recognise his personal qualities shining through. Qualities Eleanor has yet to acknowledge.

Mummy. Ninety percent of the group had thought Mummy was real and wanted to biff her for the way she spoke to Eleanor, but ten percent had clicked early that she was a figment of Eleanor’s imagination and a portent to more traumatic revelations.

It was early in the novel we found Eleanor reading Jane Eyre. Who doesn’t love a good Bronte reference? Later, of course, we noted that we realised how Eleanor would have emphasised with orphan Jane and her dreams crushed by the actions of the madwoman in the attic.

One member referred to the allegory of Polly the Pot plant. Eleanor cares for Polly and talks to her ” if only for proof of life” in her flat. It is poignant when at a harrowing part of the novel Polly dies due to Eleanor’s disregard for its needs. That Eleanor subsequently takes steps to replace Polly with new plants, a rug and a few decorations signified that, this member argued, it is never too late to take steps to improve your life whilst acknowledging you can’t change the past.

Some members of the group did feel that the Good Days section was too long. Were we being lulled into a slow burn romance with Raymond? They noted they were shocked when Bad Days hit, and their reading experience quickly got moving again.

A member recalled Reece Witherspoon had bought the optioned the book. We wondered who would play Eleanor? Presumably, it would have to be set in America. The film version of Big Little Lies had moved a long way from Liane Moriarty’s Northern Beaches, Sydney. We feared the ubiquitous happy ending. Eleanor and Raymond get married and have a baby, quipped one member.

An excellent book and a lively OBG meeting. Here’s to more of the same, on both counts, in 2020.

………….and so, we moved on to Christmas cake and conviviality.