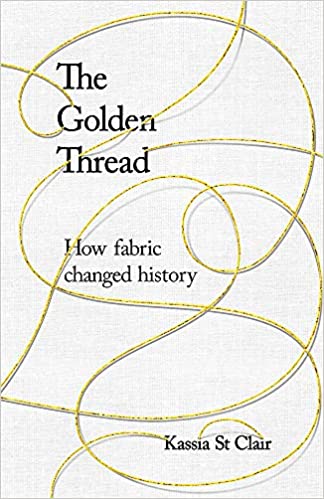 All textiles begin with a twist. From colourful 30,000-year-old threads found on the floor of a Georgian cave to the spiritual significance of the linen wrappings on Tutankhamen’s mummy. From the journeys on the Silk Roads to the woollen sails that helped the Vikings reach America 700 years before Columbus. From the lace ruffs that infuriated the puritans to the Indian calicoes and chintzes that powered the Industrial Revolution, our continuing reinvention of cloth tells fascinating stories of human ingenuity.

When we talk of lives hanging by a thread, being interwoven, or part of the social fabric, we are part of a tradition that stretches back thousands of years. Fabric has allowed us to achieve extraordinary things and survive in unlikely places, and this book shows you how — and why. With a cast that includes Chinese empresses, Richard the Lionheart and Bing Crosby, Kassia St Clair takes us on the run with escaped slaves, climbing the slopes of Everest and moonwalking with astronauts.

As a 24-hour torrential downpour hit Sydney, OBGers resorted to zoom for Tuesday’s meeting. Many members expressed their surprise and delight at this gem of a book. They were not expecting to enjoy it as much as they did. St Clair’s readable style combining of facts and anecdotes captured our interest. Everyone had a favourite chapter. Several cited the construction of the material worn by the astronauts for the Apollo landing on the moon. The vision of the ladies in the Playtex factory making their suits made us smile.

We took up St Claire’s challenge for a more feminist view of history. The creation of textiles, so crucial to human survival and progress, was the domain of women. Yet, we often forget women’s role in caring for silkworms, creating woollen sails so Viking ships could conquer the known world, and spinning and weaving cloth in vibrant cottage industries.

Many others were unaware of the darker side of synthetic materials such as rayon production. Even though these are made from wood pulp, 120 million trees must be harvested annually processed with harsh chemicals injurious to human health.

To demonstrate how much work, by working-class women, went into the lace ruffs so beloved by the Elizabethan aristocracy, I produced a lace sampler made by my sister Jane. It was created on a lace pillow using 48 pairs of bobbins showcasing various stitches, including spiders, triangular ground and honeycomb. Oohs and ahs all around for my proud sister moment!

Other members were less impressed with The Golden Thread. They felt St Clair jumped around her subject too much. They voiced the perennial OBG complaint that she required a good editor. There was also a call for photographs and pictures to enhance the text. St Clair had researched her topic with 66 pages of footnotes. One member wondered if it had been initially published thesis, and we were reading later re-prints rushed out by the publisher.

The discussion widened as we considered the current trend for fast fashion. Globalisation means workers in the third world produce clothes for a pittance in dangerous factories, allowing consumers in the developed world to buy clothes for a pittance. The outfits are often discarded after a couple of outings, overflowing into landfills. We were hopeful that awareness of these inequalities and the detrimental environmental impact grew amongst the younger fashionistas. Clothing companies are starting to promote sustainable materials as part of their brands, but the temptation of cheap clothing will remain for some time.

St Claire concluded, “We have, after all, been spinning fibres into threads for well over thirty thousand years, and then weaving, knitting and knotting those threads into all manner of marvellous objects. A little more attention to detail shouldn’t be too much to ask”. The Golden Thread opened our eyes. Time to look at our wardrobe in a new light.